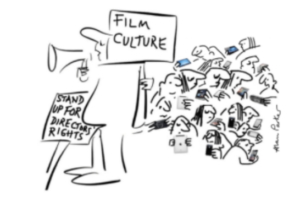 The Federation of European Screen Directors (FERA) was founded in 1980 and is the only European organisation representing film and TV directors. Driven by 49 directors associations with members from 35 countries, we speak for more than 20,000 European screen directors, representing their cultural, creative and economic interests at national and European level. We work to promote policies that maximize the creative, social and commercial potential of European directors and the audiovisual industry.

The idea to form a federation for European directors was discussed for the first time in 1979 at “Les Rencontres de Saint Etienne” in a climate of trade-union tension in Europe which threatened to despatch the project to the realm of a far-fetched dream.

Following intense communications by phone and urgent letters, another meeting was set up in Venice, in 1980, where, in the cellar of the Bauer Hotel, the name of FERA, Federation of European Screen Directors, was created along with a written agreement that would later become the organization’s bylaws. Thus, FERA was established and began its work of promoting and defending directors’ rights, their creativity and artistic freedom.

Over the years, acclaimed directors such as Sir Alan Parker, Agnieszka Holland, Marco Bellocchio, Isabel Coixet, Heddy Honigmann, Michaël R. Roskam, Charles Sturridge, István Szabó, and many others have been actively involved in FERA, supporting our work and the community of directors in Europe.

In its 40 years of existence, the Federation of European Screen Directors (FERA) has organised and been involved in various industry and policy events, conferences, meetings, capacity building workshops and webinars for our members and sister organizations throughout Europe, building a strong standing in Brussels and at national level and a network of 47 member organizations in Europe and beyond.

Throughout the 40 years since its establishment, FERA has made important contributions to European cultural policy.

In 1989, FERA contributed to the adoption of the Television Without Frontiers Directive in 1989, which established the quotas of European works on TV, the establishment of the first MEDIA programme in 1991, and its successors in 1996, 2001 and 2007 with increased funds over the years.

FERA is consistently paying close attention to the issue of freedom of artistic expression and the upholding of directors’ moral rights. After the fall of the Iron Curtain, FERA supported Central and Eastern countries in securing rights for their creators through the promulgation of film laws and authors’ rights laws. In recent years, FERA has been actively engaged in promoting and defending the right of directors and creators to express themselves freely in their work, joining forces with colleagues from the industry such as the European Film Academy Initiative “Filmmakers at Risk”. We are have officially became strategic partners in the International Coalition for Filmmakers at Risk (ICFR) as of 2021.

At the international level, FERA was very active in defending the European cultural exception in the GATT talks in 1993 in order to exclude the European audiovisual sector from trade negotiations. FERA pushed for a separate international instrument on cultural diversity, which would protect cultural policies all over the world. This was achieved in 2005 with the UNESCO convention on the protection and promotion of the diversity of cultural expression.

After 2000, FERA advocated for the revision of the Television without Frontiers Directive to adapt the legislation to the emergence of online audiovisual media services and to include the promotion of European works in their objectives. FERA published guidelines for the implementation of the new Audiovisual Media Services Directive (AVMSD) adopted in 2007.

In 2011, FERA unveiled a set of “Directors’ Contract Guidelines” at its annual General Assembly in Croatia. The Contract Guidelines are intended to inform European directors and help them to obtain better contracts. They are part of FERA’s campaign to harmonise European directors’ rights, terms and conditions around the concept of Best Practice, especially on publicly funded films. A follow-up step in this direction was the launching of the “European Directors and Screenwriters Contracts Database”, jointly with FSE and UNI MEI in a project co-founded by the European Union, in 2019, currently containing 45 directors and screenwriters’ contracts.

In 2019, FERA has published the first EU-wide study on audiovisual authors’ remuneration, “European Survey on the Remuneration of Audiovisual Authors: Their Earnings and Working Life”, digging into the economic and social situation of European audiovisual authors. The findings reflect the profile of European directors working today, informing our advocacy and capacity building work. The research was commissioned by BVR Services on behalf of FERA and FSE, with the financial support of AIPA, ALCS, VG Bild Kunst, LIRA, Norsk Filmforbund, SAA, SACD, SGAE, SSA.

In recent years, FERA has successfully advocated for the adoption of the Directive on Copyright in the Digital Single Market, adopted on May 17, 2019 and is currently working closely with our members for a smooth implementation at national level.

Throughout the COVID-19 crisis, FERA has maintained a close relationship with our members and community, supporting them in their efforts at local level and making their voices and grievances heard at EU level in our advocacy.