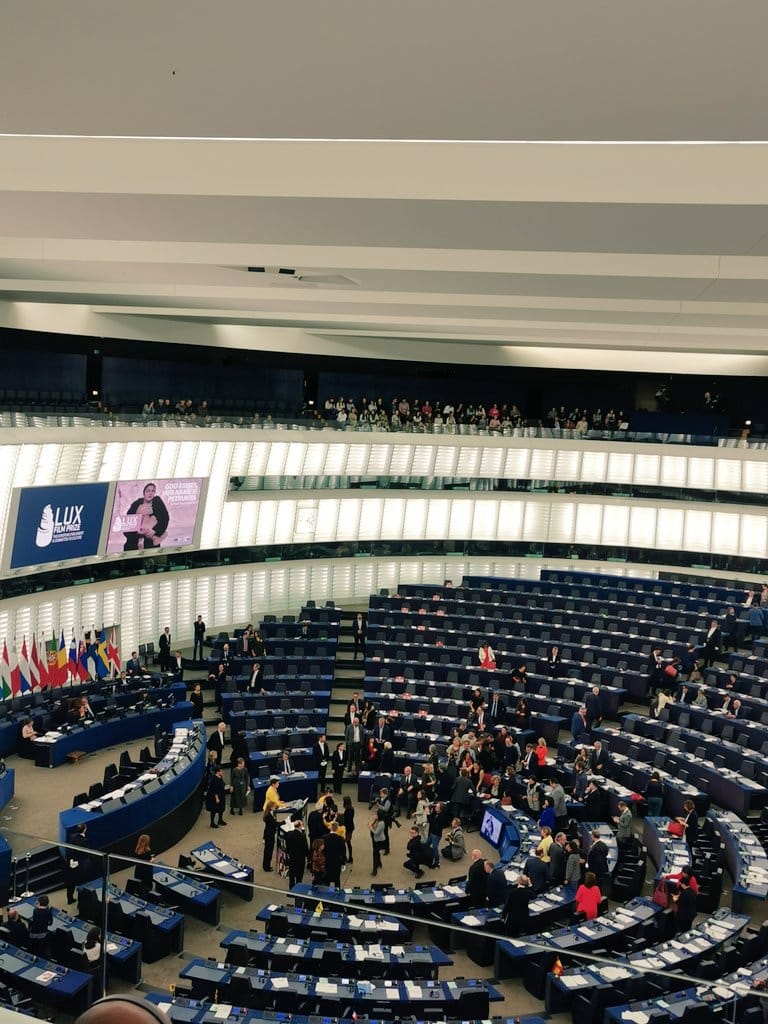 On November 27, the European Parliament LUX Film Prize Award ceremony celebrates the richness of European cultural diversity and pays tribute to the filmmakers behind the works.

We congratulate Teona Strugar Mitevska, the laureate of 2019 LUX Film Prize who was awarded the prize in the plenary chamber of the European Parliament in Strasbourg. The three finalists of 2019 LUX Film Prize were: God Exists, Her Name is Petrunya by Teona Strugar Mitevska, Cold Case Hammarskjöld by Mads Brügger and The Realm by Rodrigo Sorogoyen.

Yesterday, FERA, FSE and SAA celebrated European cinema and cultural diversity with a dinner, in partnership with the LUX Film Prize, in the European Parliament in the presence of Oleg Sentsov, Ukrainian filmmaker and former political prisoner, the finalists of the LUX Prize and other filmmakers from Croatia, France, Slovenia and Spain.

Croatian filmmakers are campaigning to protest the failure by the public service broadcaster to fulfil its obligations regarding the promotion of European works and particularly the best of recent independent Croatian documentary production. This is a reminder that freedom of artistic expression can never be taken for granted. It needs to be defended and upheld at all times.

Promoting European film, art and culture is a powerful way to counter growing populism and polarisation across Europe. The LUX Film Prize is an important initiative to support filmmakers and their works. It provides visibility and subtitles in the 24 EU official languages to films that go to the heart of the European public debate and gives them a unique opportunity to access audiences across all Member States.

“You don’t understand the importance of freedom of expression until the moment you do not have it. What is an author if they don’t have the right to express themselves? This is why the LUX Film Prize is even more important to me: it gives hope by choosing films that are uncomfortable and challenging”, said Teona Strugar Mitevska, LUX Film Prize finalist and Director of God Exists, Her Name Is Petrunya.

“European directors know the European Parliament is a strong supporter of audiovisual authors and wish the house will continue to show its support through all future resolutions and directives aiming at improving the conditions of filmmakers’ working life”, said Klemen Dvornik, Chair of FERA.

“The previous Parliament adopted some essential pieces of legislation, including the Copyright Directive, but there are still plenty to be done, such as address filmmakers precarious working conditions, gender inequality, barriers to mobility and lack of remuneration for the exploitation of their works. A European Parliament Intergroup will be a crucial first step to make sure that Europe retains its best talents and builds the next generation of creators”, said Barbara Hayes, Chair of the SAA.

The LUX Film Prize and the SAA, in partnership with FERA and FSE gathers annually for a dinner with MEPs and the LUX finalists. This year’s record high attendance demonstrates new MEPs interest to defend European culture and its creators.

About the situation in Croatia see FERA and SAA’s press release: https://screendirectors.eu/wp-content/uploads/2019/11/PR_FERA-and-SAA-support-Croatian-AV-Authors-resisting-censorship_Nov-22-2019.pdf

FERA – Founded in 1980, the Federation of European Film Directors gathers 46 director’s associations as members from 34 countries. It speaks for more than 20,000 European film and TV directors, representing their cultural, creative and economic interests at national and EU level. FERA EU Transparency Register Id No. 29280842236-21. @Film_directors

Download the PDF version of the Press Release here.