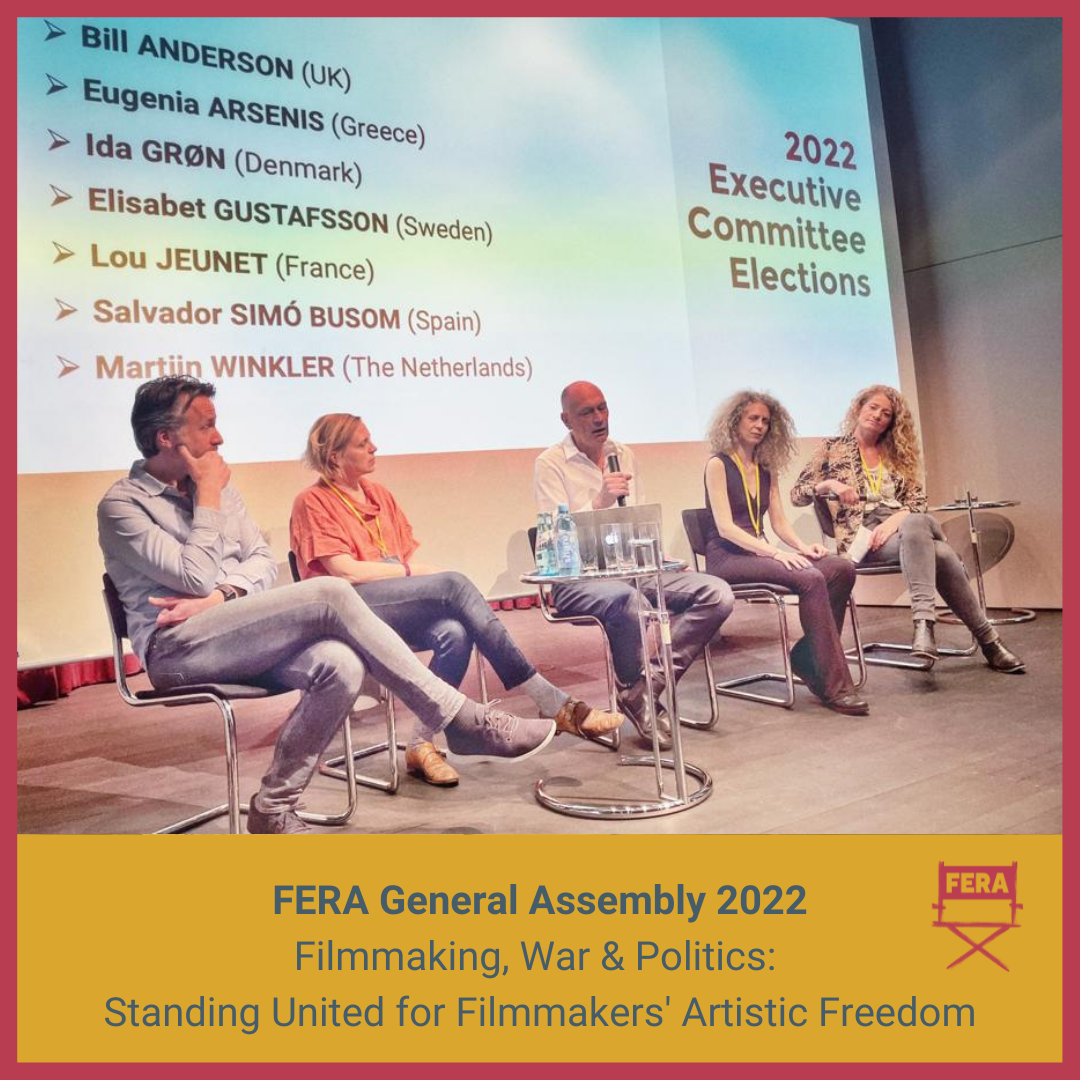 No Compromise: European filmmakers gathered in Frankfurt on May 11 to 13 for FERA’s General Assembly came together in the sober acknowledgement that artistic freedom is never a given and that the filmmaking community must stand united to protect its own.

At a time where Ukraine fights for its right to self-determination, we are reminded that culture is an essential part of any well-functioning democracy, and that filmmakers with singular voices must continue their fight to hold a much-needed mirror up to society.  Such freedom of artistic expression requires artists and the cultural and creative sectors at large to be independent and free of any governmental censorship, political interference, or pressure from non-state actors.

During a powerful exchange, directors Saeed Al Batalj (Syria), Abdullah Al-Khateeb (Palestine- Syria), Maryna Er Gorbach (Ukraine), Agnieszka Holland (Poland) and Jasmila Žbanić (Bosnia) talked about their experiences of filmmaking during and about military conflict. “Our duty is to be citizens of the world, and artists at the same time” stated outgoing Honorary President Agnieszka Holland.

The discussion laid bare the urgent need for the filmmaking community to come closer together to support filmmakers at war and their singular vision which looks far beyond recording images or propaganda – seeking truth, human connection, and memory.

The growing mismatch between filmmaking & politics was discussed by filmmakers Costa Gavras and David Bernet, as well as Tomas Eskilson, Head of Film i Väst Analysis, Mathieu Fournet, French CNC Director of European and International Affairs, Maria Silvia Gatta, European Commission Policy Officer and Susan Newman-Baudais, Eurimages Executive Director.  They affirmed that artistic freedom and cultural diversity, understood as the ability for singular creative voices to emerge across Europe and beyond, must remain cornerstones of meaningful European filmmaking politics – from regulation to public support at local, national and European level.

Members of the Federation of European Screen Directors from 23 countries met in Frankfurt, Germany from May 11 to 13 for its General Assembly annual conference – and first in-person gathering since the inception of the COVID-19 pandemic, kindly hosted by AG DOK in partnership with BVR, LICHTER Filmfest Frankfurt International with the support of VG Bild-Kunst.

Below the links to the Panels at LICHTER Film Fest Frankfurt International: