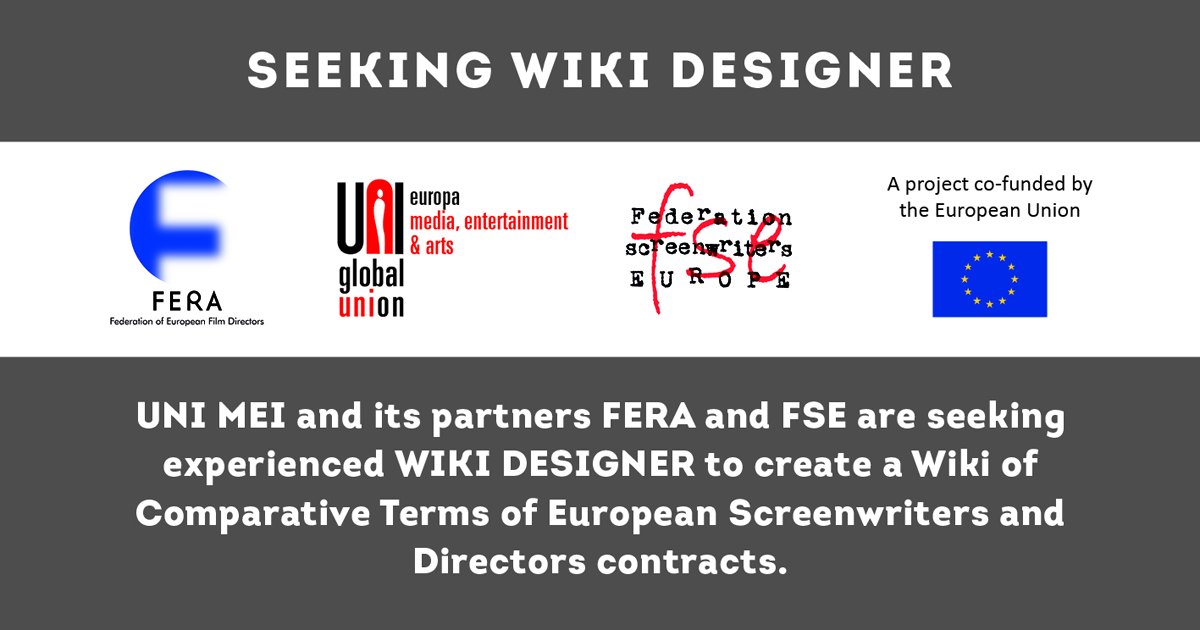 UNI MEI and its partners FERA and FSE are seeking experienced WIKI DESIGNER to create a Wiki of Comparative Terms of European Screenwriters and Directors contracts.

Pdf version of the call for wiki

The project brings together representatives of screenwriters and directors from across Europe, in the context of a scheme funded by Directorate General for Employment of the European Union, to develop new tools to facilitate collective bargaining and social dialogue between authors such as screenwriters and directors, with producers and broadcasters. One of the most important of these new tools is a Wiki comparing the detailed terms of authors contracts across Europe to assist those negotiating contract terms by giving them access to best practise across the European Union.

The project is managed by UNI Europa – media, entertainment & arts – which brings together unions in the media and entertainment industries. Participants in the project are drawn from members of Fédération Européenne des Réalisateurs de l’Audiovisuel (FERA), representing guilds and unions of film and television directors, and the Federation of Screenwriters in Europe (FSE) representing Europe’s screenwriters.

The objective of the Wiki :

A minimum of 60, and potentially 100, contracts from different member states, translated into English, will be compared paragraph by paragraph (approximately 25 points of comparison) to provide the representatives of screenwriters and directors, members of FERA and FSE, with the means to assess their own contracts by comparison with others.

The challenge of the Wiki :

2. All contracts however involve common characteristics – all involve the sale or licensing of copyright, payment terms, provisions for moral rights, provisions of reversion of rights, etc. Many will also have unique provisions, particular to a certain member state, for example.

4. The Wiki is intended to be used by a limited list of people (approximately 200) and the capacity to amend or alter information will be limited, with 2 or 3 people enabled to alter (up-date) their own contracts only.

5. Some capacity to manage the ongoing work of the Wiki will need to be transferred to staff of FERA and FSE.

6. The Wiki would be attached to and associated with the websites of FERA and FSE.

The role of the Wiki designer :

The basic work of assembling the contracts and making the comparison will be made at 2 workshops in Brussels attended by representatives of screenwriters and directors representative organisations (the first in December 2018) and a steering committee will be available to oversee the work of the Wiki designer. The designer will not be expected to break down the contract contents but will be expected to pay attention to the content and assist in designing a structure that facilitates ease of use of the information.

The contract for the work will be between the designer and UNI Europa. It will be a freelance service contract. The designer will report to a steering committee of FSE, FERA and UNI MEI on a regular basis and on a day-to-day basis to a named individual.

It is intended that the work will take place in Brussels. The working language and the content of the Wiki are in English.

Applicants should submit a CV indicating their experience in similar tasks.

Applicants would also be expected as part of their application to :

• recommend which would be the most appropriate software for the design of the Wiki,

• calculate the approximate time needed to complete the task of designing and implementing the Wiki,and quote an anticipated price for the work.

Documents may be sent by email to johannes.studinger@uniglobalunion.org or by post to Johannes Studinger / CBW Wiki, UNI Europa, rue Joseph II, 40, B-1000 Brussels.

Applicants may be called for interview.

It is intended that the work would commence in September of 2018.

This project is co-funded by the European Union.